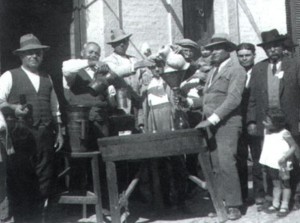 We taste wines from specific regions, varietals, or wine makers announced through our email list and press media – What’s Next:

Zinfandels, I’ve searched for the right Zinfandels, and of course always leading me back to California, Having one of the earliest history’s with the varietal. Some of the oldest Zinfandels only exist in Napa Valley. The wines I’ve picked are not easy to find, rarely available readily.
I know you will enjoy them. Rich, juicy, balanced. Unique!

Join us for a Saturday soirée of wines, small bites.
$10pp tasting fee
Just in case you need a reason:
Many doctors agree that something in red wine appears to help your heart. It’s possible that antioxidants, such as flavonoids or a substance called resveratrol, have heart-healthy benefits. Nuff said!!

$10 Waived on purchase of 3 bottles or more

At a recent trade tasting I met Master Sommelier Bobby Stuckey, (236 in the World) and Chef Lachlan Patterson, both James Beard award winners, tasting through their hand picked selections.
After spending time at Little Nell’s in Aspen, and then French Laundry in Napa, they decided to team up and open their own restaurant in Boulder Colorado, Frasca.
Wanting to select wines for their restaurant they headed to Italy to find wines and build relations with specific wine makers.
Fast forward: Scarpetta wine label is born. These are quality every day wines which stand for great values and quality. Hand picked by Master Sommelier Bobby.
We will tasting these wines this Saturday, 4-7p $10 tasting fee.
Please join us.

Oddero, This Italian gem has wonderful Barolo’s, One of which is aged for 10 years before release, and only in exceptional years.

Every public event—from the signing of the Declaration of Independence to George Washington’s Inauguration—was toasted with a glass of Madeira. For more than 150 years, no other wine rivaled it in the eyes of connoisseurs.

Join us on Saturday March 5, 2016 4-7p, Mr Holmes will be pouring his second vintage of which will include a 100% Cunoise, which I had the chance to taste earlier this past month, “I’m a fan of all that Mr Holmes is producing, a thougtful and detail oriented man determined to make some of the best wines in the state.
Tasting fee of $10 4-7p

Tranche Winery is coming to Tacoma

Mr. Holmes holds a degree in Enology from UC Davis, has worked many years in the Ciel Du Cheval vineyards on Red Mountain. His very first wine release was last year, a beautiful 100% Viognier.

With total production at around 2,100 cases total.

October 18, from 5-7pm. We will be pairing these wonderful wines with Artisan Tamales.

Fabulous & Esoteric Red and White Wines of EuropeAugust 23, 2014 5-7pm Tasting Fee $5.00
Domaine Les Cantates 2012 Jacquère Cru Chignin
Rene Quenard’s family has been farming vineyards in Chignin for over 300 years. In the early 20th century they planted their first vines on the slopes of the “Savoyarde” mountain where the famous Bergeron apricot orchards bloom. The Quenard vineyards are planted to traditional Savoyard varietals: Gamay, Pinot Noir, Mondeuse, Roussanne and 4 of their 18 hectares planted to Jacquère whose vines range from 30-100 years in age. In 2008 the Domaine was purchased by Claire & Pierre-Emmanuel Taittinger of Champagne. Claire, a native of Savoie bought the property with the goal of keeping the old traditions in place. Claire began by making a few modernization updates and has increased the quality level of the Domaine’s wine.
Bodegas Arzabro 2013 Txakoli “Luzia de Ripa” 90% Hondarrabi Zuri, 10% Izpiriotza Txikia
Bodegas Arzabro is a family owned, handcrafted winery, established in 2007, producing Txakoli wines from 15 acres of their own vineyards of the varieties “Hodarrabi Zuri” (Petit Courbu) and the minor variety “Izpiriotza txikia” (Petit Manseng). The vineyards are located in Delika village, in the high valley of the Nervion River in the Basque Country, on limestone soils & clay mixed with gravel creating good drainage. Hondarribi Zuri is the main variety used in all kinds of Txakoli by law and is characterized by a medium to high acidity graduation. The philosophy of the Bodega is based on minimal intervention in the production process. They support and practice organic viticulture & production of wine. After harvest, all pruning remains are converted into compost as organic fertilizer to the soil and avoid any use of herbicides. Luzia Ripa was a unique woman and a nun who lived in the 16th century in the region. She was in responsible for managing the vineyards attached to her religious center. She left written testimony in which she described in detail the work required essential to the vineyards at the time, with their costs, problems and achievements. The female wine makers gave this name as a tribute to her.
Domaine Les Cantates 2012 Mondeuse
Only 1 hectare is planted to the traditional Mondeuse varietal. In 2012 Vintage the winery rebranded itself as “Les Cantates”. The rocky soil & sunshine bring intensity to the typical aromas of the wine, apricots, peaches, blackberries and cherries along with spicy notes and nice minerality. Their goal is to be respectful of the land and so grapes are all hand harvested. Fermented with natural yeasts and aged 6-12 months in stainless steel.
Podere Ruggeri Corsini 2009 Autenzio Rosso $25.00
Podere Ruggeri Corsini Winery was founded in 1995 thanks to a passion for the countryside and great wines. Loredana Addari and Nicola Argamante, both graduated in Agriculture and specialized in wine-growing and enology, decided to change their lives, leaving their city jobs to buy a small farm business (which at the time only produced and sold its’ grapes) in Monforte d’Alba, in the heart of the Langhe, Cuneo. It’s a family run business, owned by the two agronomists and Loredana’s brother, Lorenzo. The winery was given the name “Corsini” as it represents the ancient hamlet in Monforte d’Alba, made up of very old stone houses, whereas Ruggeri stems from Nicola’s maternal side of the family, as his mother who strongly believed in him and Loredana, supported them financially, helping them to make their dream come true. The Albarossa vine is obtained by crossing Chatus (Nebbiolo di Dronero) x Barbera, which gives origin to wines with an elevated alcoholic content and the smoothness of an intense polyphenol component (which never shows any signs of astringency), to contribute to the maintenance of a sustained acidity. The result is a wine of a deep ruby-red colour, with hues of violet, and a rich, complex bouquet where the perception of fruit prevails over the floral traces, accompanied by a spicy component (tobacco). Thanks to an elevated alcoholic content and glycerine, it has a warm flavour that is well structured, smooth and harmonious, full-bodied, has a lingering aroma, and is never ‘flimsy’ due to its correct acidic balance.
Moulin De La Gardette 2010 80% Grenache, 10% Mourvedre, 10% Cinsault Gigondas “Tradition
Gigondas vineyards have undoubtedly been producing wine at least since Roman times; according to some, the name of the village in Roman times was “Jocunditas”, Latin for “Happy Town”. Back in 1670 the Archives de Rochegude noted the quality of the vineyards on the stony hill of la Gardette just outside the village of Gigondas, so it is no surprise that the Meunier family has been making good wine here for five generations. Until the middle part of the 20th century the slopes of la Gardette were not devoted solely to vines as they are now but grew olives, apricot & cherries, and even the Jurdic family goats grazed there. In 1946 Victor Jurdic was in the vanguard of those winemakers who knew that Gigondas wines could establish a reputation of their own, and produced the first wines to be bottled under the la Gardette name. The appellation Moulin de la Gardette first appeared in 1958 after Genevieve Jurdic married Laurent Meunier who came from a struggling artistic and literary family in Paris. The “Moulin” refers to the old windmill that once stood on the hill of la Gardette. As their enterprise prospered, the Meunier family added other plots of land close to around la Gardette. Nowadays, Jean Baptiste Meunier who took over the family business in 1990 tends to the mature vines whose average age is around 65 years in twenty-five parcels of Gigondas garrigue.
———————————————————————————————————————————————-
Older Posts:
Saturday, October 19th Hard Cider Tasting at Black Door Wine Company Time: 4:00pm – 6:00pm It’s only a matter of time before fans in Tacoma embrace what’s others are drinking in England, France and now the USA. Our esteemed French producer is biodynamic, crafting lively cider on the palette, low in alcohol and everything, but sweet. A refreshing drink that is characteristic of the soil, just like wine!

The premier Argentinian wines with the Bordeaux past

Bertrand Cuvelier grew up in Bordeaux, moving to Argentina to begin a personal winery journey to make his wines, his name, from experiences of Bordeaux.

Please join us to celebrate these unique wines

“quite possibly a once-in-a-lifetime opportunity…..”

This is Red Fruit the Gamay grape expresses, so well, with a lovely month feel of elegance, finesse, and a fleshy & silky body. Stunning!

Think, full-bodied stamped with kirsch, spice and mignonette aromas-flavors that are fruity and floral. This line up is about forthright red fruit with plum.

These wines do not usually show the word “Beaujolais” on the label, in an attempt to separate themselves from mass-produced Nouveau; in fact vineyards in the cru villages are not allowed to produce Nouveau. The maximum yields for Cru Beaujolais wine is 48 hl/ha. Their wines can be more full-bodied, darker in color, and significantly longer-lived.

Located north of Lyon in eastern France, Beaujolais overlaps Burgundy in the north and Rhône in the south. The picturesque Beaujolais vineyards run along the Saône River, where winemakers have crafted deliciously supple and fruity wines since the days of Ancient Rome.

On mainly granitic soils, the Beaujolais Crus form a meandering path. From south to north, Brouilly is followed by Côte de Brouilly, Régnié, Morgon, Chiroubles, Fleurie, Moulin-à-Vent, Chénas, Juliénas and Saint-Amour. Just one grape, Gamay, expresses itself differently in each of the Crus. You will have the opportunity to compare many of these areas side-by-side to pick out your favorite. Beaujolais delivers terrific quality for the price, which is why it is a favorite of people working in the wine business.

Black Door Wine Company is excited to taste through a portfolio of high Piedmont wines destined for greatness due to ideal practices employed by a new generation of winemakers. Colline Novarese, Ghemme, Gatinara and Fara viticultural areas are relevant to the Il Chiosso wine lineup, that is mostly focused on the medium body and aromatic Spanna grape, the local name for Nebbiolo. We will taste through wines of the Valsusa DOC that comes through the Casa Ronsil wines to be worth our customers’ time and money.

(a bit more reading below)

High in western Piedmont, is a narrow valley of Susa and the hamlet Chiomonte located between the Graian Alps to the north and theCottian Alps in the south. Here Pierino Ronsil and his son in law Frank Thollet are dedicated to a family tradition that dates back to 1250, although wine making in the mountain region goes back to Roman times. Casa Ronsil is the future for the forgotten varietals of the Val de Susa DOC, some of the highest in the world at 1100 meters above sea level (about 3000 ft.) between 50-90 years old. The vineyards are tended to organically and no sulpher is used during vinification, and very little is used bottling. Fermentation takes place in stainless steel tanks and and aged in neutral barrels.

The young hipster operation Il Chiosso, is making a dashing array of wines from various terriors, and naturally tended in accordance to the rhythm and tune of the cycles of the moon and seasonal changes. Marco Arlunni and Carlo Cambieri are childhood partners, now in their 30’s, they have pooled their family resources, which happens to be choice vineyards in Gattinara, Ghemme, and Fara – and invented a state of the art winery.